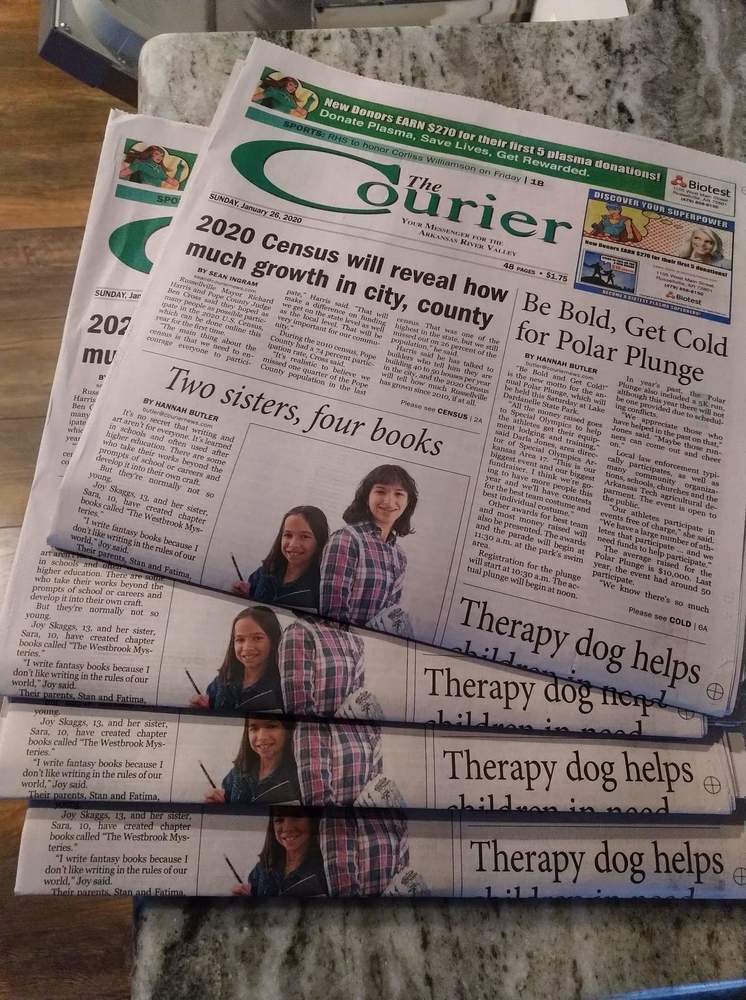 From the Courier News.

It's no secret that writing and art aren't for everyone. It's learned in schools and often used after higher education. There are some who take their works beyond the prompts of school or careers and develop it into their own craft.

But they're normally not so young.

"I write fantasy books because I don't like writing in the rules of our world," Joy said.

Their parents, Stan and Fatima, said that Joy has been an avid reader since she learned how to read.

As a birthday present, Joy gave her mother the first book.

"I was really surprised because I know she's always reading all the time," Fatima said. "She mentioned that she was writing and I think when she started writing all of this we thought we would support her."

Fatima was able to bring "The Westbrook Mysteries" to life after having them published in Brazil.

"They [sisters] both got involved and they do their best," she said. "We just thought we'd better invest in this because it's going to be really, really nice for her to have her own book. Maybe someday she [Joy] can be a very famous writer and she [Sara] can be a very famous illustrator."

Joy got the idea for the first book from a dream about one of her teachers who accidentally was turned back into a child. In the first book, it's up to her to help the teacher turn back into a grown-up. Joy is the protagonist, and bases her characters off of people in her own world. It's based on one of her middle school teachers, Daniel Brinker, who inspired her to continue writing and served as a "creative consultant" as she worked on her books.

"He's one of those teachers that every student should have at some point," Joy said. "He's just there, he's encouraging and funny and helps inspire learning."

Brinker even wrote a foreword for her books, stating, "Joy's talent for writing is apparent to anyone who reads anything she has written."

She's written four books so far and is working on the fifth one now. Although, her extracurricular activities and schoolwork keep her busy elsewhere.

Joy is involved in the robotics club, the swimming team and she's working on a piano solo and a painting for her church.

Sara's drawings have improved since she was 5. She began with faces and even started selling her drawings to friends at school.

"She's an amazing artist and I can't draw this good," Joy said of her sister's talent. "I'm not even going to try to hunt down someone who is as good as she is, as such a person does not exist."

"She's a natural talent," Fatima said. "As she got older, the more defined her drawings got."

"Her drawings are firm with deep expression filled with different distinct characteristics," Stan and Fatima wrote as a part of Sara's biography in the books.

When she's not drawing, Sara enjoys dancing, singing and being involved in Bible quizzing at church.

Sara said she doesn't want to continue drawing as her career but enjoys it for now as she continues to illustrate for Joy's books.

Together, the sisters have created something special: "The Westbrook Mysteries" for all to enjoy.